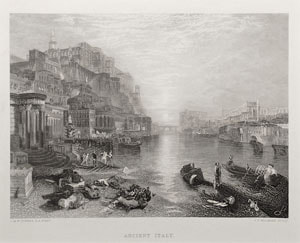 Willmore was born at Erdington, Staffordshire. Following a seven-year apprenticeship with the engraver William Radclyffe (1783-1855) in Birmingham, he moved to London where he worked for three years in the studio of Charles Heath (1785-1848).
In 1843, Willmore exhibited Ancient Italy (right), an engraving after J M W Turner, at the Royal Academy and was elected an Associate Engraver. Willmore produced plates after works by John James Chalon, Clarkson Stanfield and Edwin Landseer. His best work was after ‘…Turner, from whose works, so difficult to render, he produced many plates of great delicacy and excellence.’ (Redgrave).