Our gallery of etchings can be viewed here.
​
Our article on the etching revival in Britain can be read here. 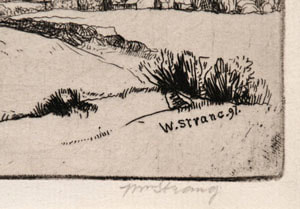 William Strang RA RE (1859-1921)
Strang was born at Dumbarton and in 1875, aged 16, he moved to London to study under Alphonse Legros at the Slade School.
A prolific artist, Strang was elected a member of the Royal Society of Painter-Etchers in 1891 (where he exhibited over 160 works during the course of his career) and a Royal Academician in 1921. He produced over 750 etchings, drypoints and other prints as well as oils and watercolours.
Discussing his prints, Gray (1937, p.176) noted that, ‘He was an experimenter in technique and an extremely rapid worker, whose facility and skill were astonishing… Always he is vigorous… he left a series of prints of great power in which he has achieved a scale astonishing within such a small limit.’