What is an Etching?

What is an etching?

An etching is an intaglio print produced by the effect of acid on a metal plate.

How is an etching made?

The illustration below provides a basic visual introduction to the etching process.

The etching process, though time-consuming, is relatively straightforward. A metal plate is coated in a layer of acid-resistant wax, a design is drawn on to the wax through to the metal plate and the plate is then immersed in acid. The acid bites away at the metal elements exposed by the artist’s design; the longer the plate is immersed the deeper the lines will be etched and the darker they will print. The etched image is constructed in stages (known as states), the various elements of the picture being worked on systematically until the finished image is arrived at. These processes might include stopping out certain areas that the artist considers complete, and further exposing other areas to be bitten to a greater depth in order that they will print to a darker shade.

The three images below, all by Karl Salsbury Wood (1888-1958), provide an insight into the developmental stages etchings go through.
Windmill with Pigs (above left) is at a very early, rudimentary stage – just the outlines of the windmill and the pigs have been bitten. This print is numbered 1/1 which presumably means this is the first impression Wood took from the first state of the print.
The image above centre is an early version of the etching on the right. Occasional mishaps happened, too. The centre print appears not to have been adequately pressed as the left-hand plate edge is entirely absent.
Eventually, after many decisions regarding the location of the lines to be etched and the depth to which they should be bitten, a finished work of art was produced.
Below on the left is a metal etching plate produced by Joseph Henry Kirsop (1886-1981) in 1946. The scene is Sandhill by the river in Newcastle upon Tyne. On the right is the completed etched print Kirsop took from the plate.
Sandhill, Newcastle upon Tyne, 1946, Joseph Kirsop (1886-1981), original etching plate and etching
​
As can be seen, artists have to work in reverse when using an etching needle to draw the design through the acid-resistant wax. This is to ensure that when printed the image is true to life. This reverse process is well-illustrated in the details of the plate and completed etching below.
Characteristics of an etching
​
As etchings are printed on damp paper under considerable force, it is usual to see a clear recessed impression on the sheet; this is known as a plate mark. The plate mark can be seen in the image below. 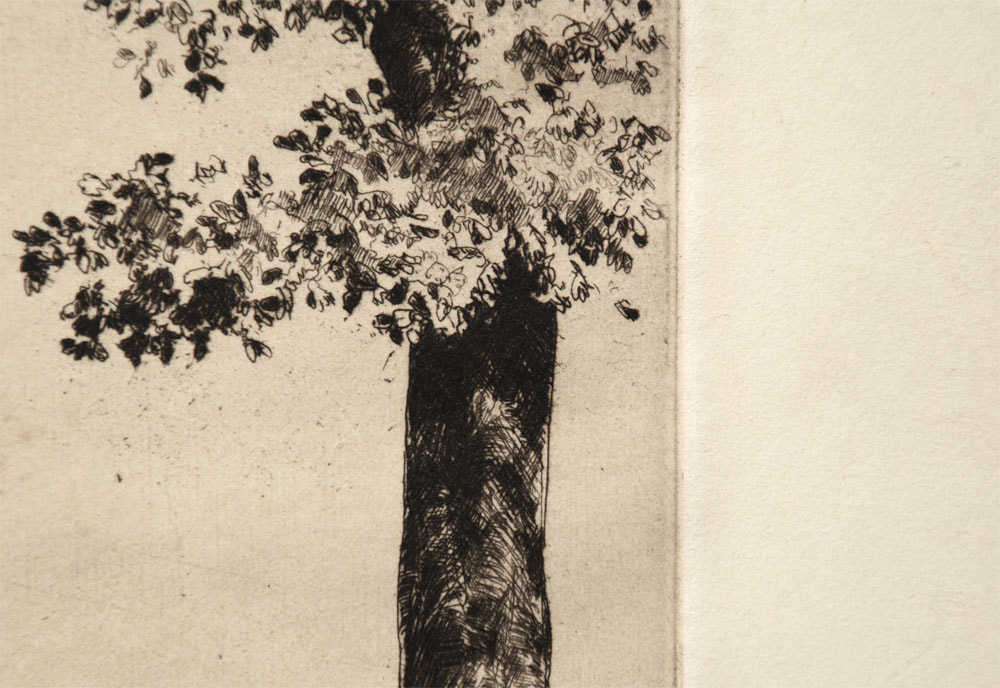 Birmingham University (detail), Wilfred Crawford Applebey (b.1889), etching
​
Additionally, the impression left by the plate may be visible on the reverse of the sheet, as seen in the following images.
Birmingham University (front and reverse), Wilfred Crawford Applebey (b.1889), etching
​
It is common for artists to sign their etchings in pencil in the margin: 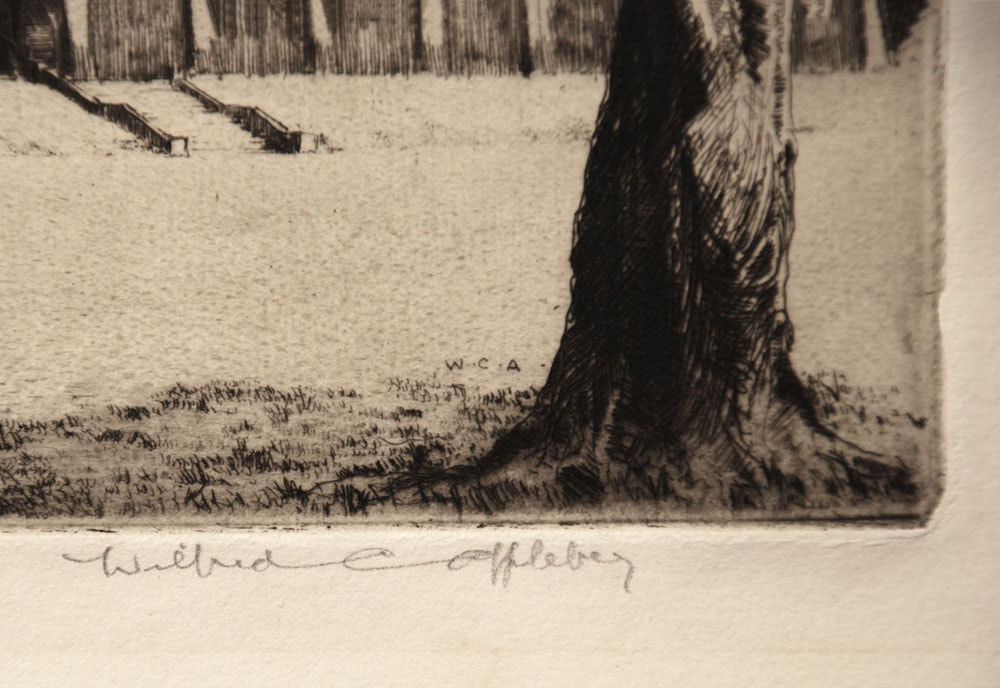 Wilfred Crawford Applebey (b.1889) signature
​
Notice, too, that in the above example, Applebey has signed the work with his initials in the plate.
The margin may be additionally inscribed with the work's title: 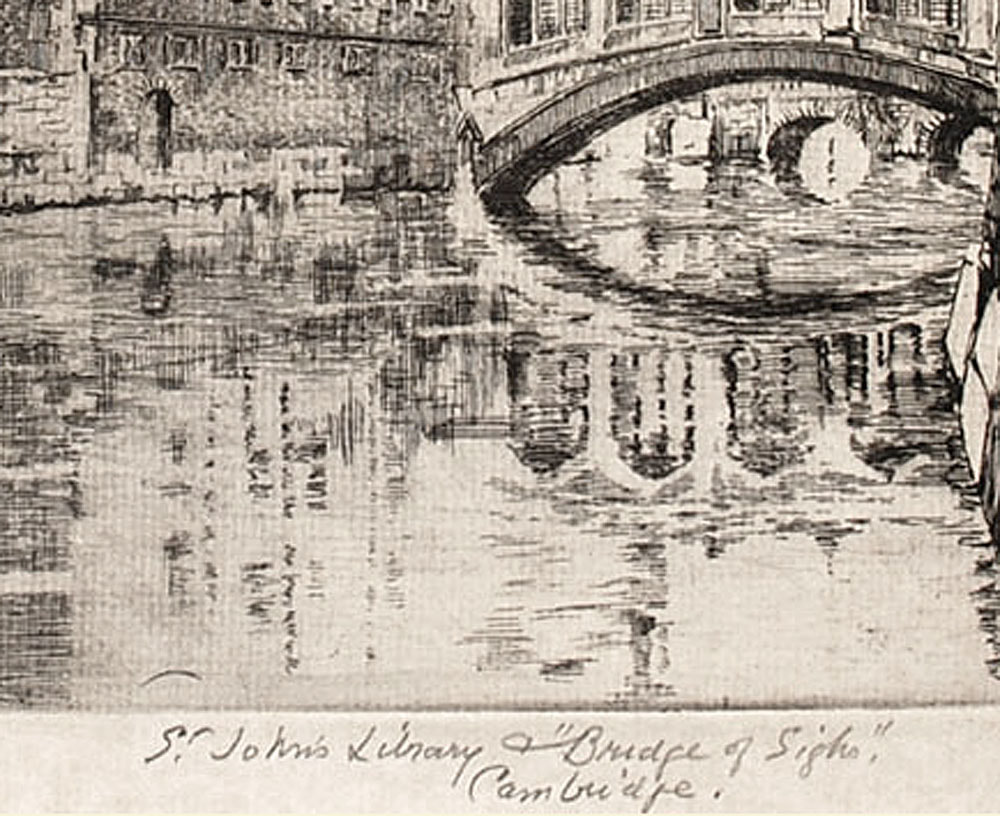 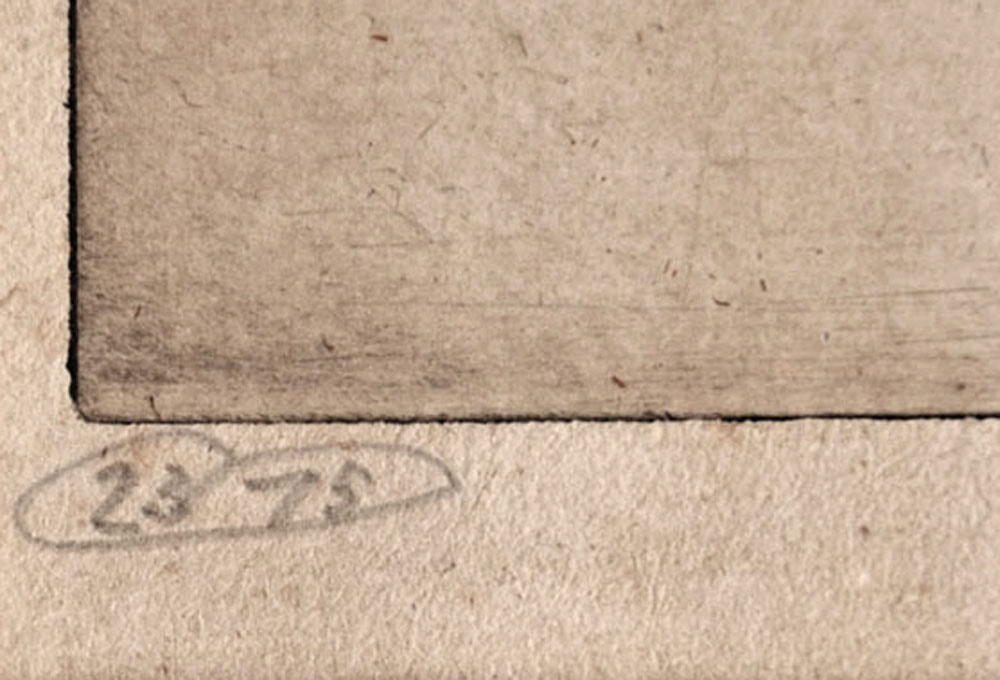 The Gate of Heaven, 1927 (detail), Sidney H Sime (1867-1941), etching
​
​Above, Sidney H Sime (1867-1941) has included a wealth of information in the lower margin of his etching The Gate of Heaven, 1927. This is the 10th state of the etching and the title is inscribed. Additionally, Sime has written, ‘Etched and printed by me on my press at the old Crown Inn in Worplesdon, Surrey’. It is signed and dated, and also signed in the plate.
​
A brief history of etching

The earliest known dated etching is Woman Bathing her Feet of 1513 by Urs Graf (c.1485-1528). Other early pioneers of the medium were Albrecht Dürer (1471-1528) and Albrecht Altdorfer (1480-1538). Etching flourished in the seventeenth century, particularly in Italy, Germany and the Netherlands. Artists, notably including Rembrandt (1606-1669) who produced over 300 original etchings, were drawn to the freedom of design etching afforded in comparison with engraving.
Following these early endeavours, interest in etching declined. As Arthur Hind (p. 312) noted, ‘for the century and a half that followed the death of Rembrandt the art of original etching was little practised and less understood.’
Interest in etching was rekindled in the nineteenth century. In Britain, members of the Old Etching Club, established in 1838, did much to promote interest in the medium, as did the pioneering work of Francis Seymour Haden (1818-1910) and James Abbott McNeill Whistler (1834-1910) later in the century.
The first three decades of the last century witnessed a high point in the production of original etchings, particularly in Britain, France and America. The impetus came from Britain and from Haden who championed original etchings as original artworks and established the Society of Painter-Etchers in 1880 (the society was granted a royal charter in 1889 and is today known as the Royal Society of Painter-Printmakers). The Wall Street Crash and resulting economic downturn had a detrimental effect of the flourishing market in original etchings.