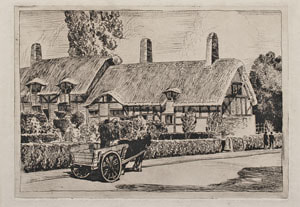 Buckley was a painted and printmaker from Oldham, Lancashire. He studied at Oldham School of Art and taught there in the late 1920s and early 1930s. Additionally, he trained as an architect.
After the Second World War, he moved with his sister (recorded as a craftsperson and weaver) to Cartmel in Cumbria. Here, the siblings established a studio in the Gatehouse of Cartmel Priory. Buckley exhibited from his studio as well as at the Royal Institute of Painters in Watercolours, the Royal Scottish Academy and the Manchester Academy of Fine Art.

Buckman, D (2006), Artists in Britain Since 1945, Art Dictionaries Ltd
Child, D (1994), Painters in the Northern Counties of England and Wales, University of Leeds
You can read our short article on Buckley here.