Our extensive gallery of Punch cartoons can be found here. 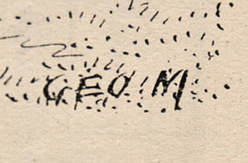 ​George Morrow (1869-1955)
Morrow was born in Belfast and studied art in Paris prior to beginning a 48 year association with Punch from 1906. He succeeded Frank Reynolds as the magazine’s Art Editor in 1930.
‘George Morrow was primarily a man with a sense of humour… Morrow in his prime, which continued far longer than with most humorous artists, could draw a simple little figure with a face that was funny per se. In his more elaborate compositions there would often be a head in a crowd that was obviously a Morrow head, yet it was funny in a different way from other Morrow heads… For issue after issue… he was one of the two artists who were trying to make people laugh with both drawing and caption… he often carried the paper on his shoulders.’ (Price, 1957).